For countries like Egypt, sand is a serious issue. Much of the sand ends up on the roads, which can lead to hazardous driving conditions. How can this and other debris be effectively taken care of, swept up, and placed on a truck? That’s where Broddson comes into play!

Broddson AB in Motala, Sweden, is a world-leading manufacturer of sweepers for road maintenance equipment that is experiencing rapid growth in Scandinavia, the Middle East, and Africa. In addition to global sales, installation, and technical support, they also provide spare parts and brushes through a network of suppliers and partners.

A popular machine is the Broddson Scandia towed conveyor sweeper which removes sand from the road and transports it via a conveyor belt to the back of a truck.

To design its complex sweepers, Broddson uses IronCAD. When creating a new machine, there are many phases that address issues such as making sure there are clearances for the installation of a diesel engine and various other components, the welding of beams, and plate bending. 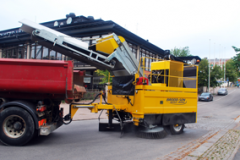 Prior to adopting IronCAD, Broddson used a traditional parametric 3D CAD program.  “We felt that our parametric program was certainly competent, but that parametric design was a very cumbersome approach,” says Broddson Construction Manager Richard Liljedahl. “Conditions and constraints to be administered, every part having to be saved to its own file, resulting in hundreds of files, with no real benefit to us — we wanted to be able to create and modify as easily as possible.”

Because of the constraints imposed by the traditional parametric CAD program they were using at the time, Broddson started looking for alternative 3D CAD solutions. Liliedahl continues: “I happened to see a movie on YouTube that showed how IRONCAD worked. I thought immediately that this seems to be something completely different! I downloaded IRONCAD and tested it myself and along with the Swedish training material available on YouTube, I was quickly up and running.”

It later turned out that Broddsons’s major subcontractor BTT Plate AB in Kisa had already discovered IRONCAD and had been using the program for years! Since BTT could absolutely recommend IRONCAD, it was an easy decision for Liliedahl and the Broddson engineering team to switch.

“What I really appreciate about IRONCAD is that it works so freely and easily,” he says. “It’s a really big difference in approach, more logically laid out. The ability to have as many parts in a single file makes working and designing much easier, especially given the complexity of the machines we design. If I later choose to have a part saved out to a separate file, I have that option, but it’s my choice. Having handles on the features makes it really easy to size components, SmartSnap makes accurate sizing relative to other parts in the design as simple as holding down one key on the keyboard and dragging the left mouse button. Different 3D primitives, standard components such as I-beams, are placed in your design just by simply dragging and dropping from the catalog into the scene, like Lego®! I can easily group parts in assemblies in the history tree — like folders in Microsoft Explorer. The TriBall makes it extremely easy to move, copy, and rotate parts, features, and even faces with precision, without having to think about how the model was created from the beginning.” 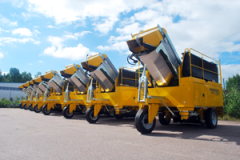 “We are obviously delighted to have Broddson as a customer,” says Henrik Andersson of Solidmakarna AB, which represents IronCAD in Sweden. “Their products are leaders in their industry and a perfect fit to create in IRONCAD — machine construction with a mix of industrial components and self-manufactured parts. We see Broddson’s needs as typical for many companies: You want to create and modify freely without the restrictions of traditional CAD software, develop new products and customize existing ones. No one can predict what the next idea or customer’s request will be, so having a design system like IRONCAD that offers incredible flexibility is key to reaching your design goals quickly and efficiently.

“Many companies have chosen a regular parametric 3D solution, with all its limitations and lockups, without knowing that there is a better method in IRONCAD with incredibly flexible design capabilities. Now, more and more people have heard about this better approach to design. Now we see a ‘next generation of 3D’ with a switch to IRONCAD, which is easier to learn, more flexible and adaptable.”