Karling Racing has been prominent in the racing industry for many years, completing their first motorcycle engine design and build back in 1992. At that time, company owner, Charley Karling wasn’t satisfied with the two cylinder V-twins (Harley-Davidson style) engines that were available on the market and decided to do something about it.

In 1997, Karling Racing built a complete new dragbike with the same type of motorcycle engine design but with a smaller displacement and a Supercharger so that the nitro-methane-fed engine could get enough air to make up to 800 hp and over 800 ft/lbs in torque.

The major motorcycle engine design challenge for their new dragbike was to figure out how to get a self-supporting powertrain with engine, supercharger, primary transmission, and clutch without the use of a chassis. Older motorcycle designs allowed for too much flex, which could cause the transmission belts to go out of alignment.

Alignment problems often result in catastrophic belt failure, especially when one considers the tremendous torque and forces required for drag-racing. There was also a long list of other goals that Karling wanted for their new motorcycle design such as: easier handling, easier service, and of course it had to go really, really FAST!

The four-day IRONCAD training course Karling participated at IronCAD distributor Solidmarkana‘s offices in Stockholm, Sweden, made it possible for Karling to turn its dreams into reality. The Karling team quickly realized that anything was possible because of the power and flexibility of the software. All important components that needed to be designed were at their fingertips, including the power-unit, the mountings of the wheels and brakes, front fork brackets, body mountings, fuel system, and clutch management. Everything would be completely designed in IRONCAD. 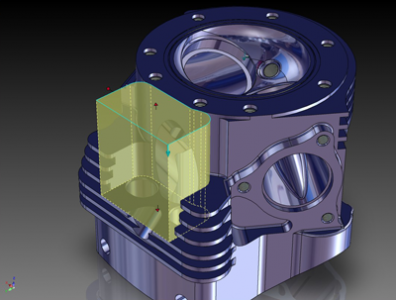 A Karling Racing engine cylinder head design made with IRONCAD in 2013.

Another great example is Karling’s piston design project. The design of the piston is very important for the performance of a racing motorcycle. With the help of IRONCAD, Karling designed a piston crown (top) and, using built-in tools, they measured the volume of the dome and calculated the compression ratio. It is even possible to measure the volume of the combustion chamber with all the assembly components. Finally, in order to get optimal flow out of the cylinder and eliminate interference, the engineers were able to design super-accurate valve clearances.

After spending over 6,000 hours building their bike using leading edge technologies such as Dual 44 Amp Top Fuel car magneto ignition, Karling realized they had some new challenges. Customers were starting to ask for parts and components designed and produced for the new dragbike.

Because everything had been designed in IRONCAD, it was now easy to present these new products to customers. If a customer wanted special optimization for their application, Karling had full control over different customers’ applications. 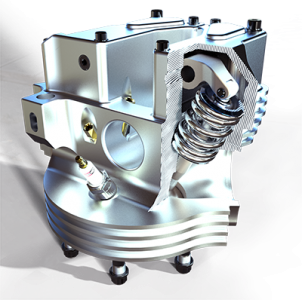 A good example of this new-found productivity was the 8” Slider Clutch. Most often it started with a Request for Proposal (RFP) from a customer about three major things:

In a couple of minutes, Karling could make a drawing with all the overall sizes in imperial, metric, or both. They found it easy to customize different combinations of clutch arms to meet their customers’ demand. IRONCAD made it easy to offer custom-made parts and assemblies.

Karling was also able to control costs because IRONCAD offers fields under Part Properties to record part prices and attributes. These are then automatically included on the Bill of Material lists with pricing. BOM lists are useful to present a spare parts list or export prices to Excel.

The time spent on motorcycle engine design before manufacturing is important to ensure optimal engine performance, not only maximum horsepower and torque, but also improved fuel efficiency and longer part lifetime. And the biggest bonus, Karling saved a lot of time by reducing the need for hands-on work during the installation and assembly as the parts fit correctly the first time!

Another useful tool in IRONCAD is the Center Of Gravity (COG) tool. Having designed several high-performance crankshafts using COG, Karling eliminated the need for manual balancing after manufacturing. By adjusting the design of the crankshaft in the digital world, they saved time and money in reality!

Another important IRONCAD capability is the Import and Export functionality. When receiving an AutoCAD 3D file with an oil pump from a manufacturer, they simply imported the file into a scene, redesigned the pump to fit a common racing application, and then exported it back to the manufacturer in the same format. More time and money saved.

“After participating at the four-day training at Solidmakarna, it was time to turn our dreams into reality,” said Charley Karling of Karling Racing. “Without IRONCAD, we wouldn’t be able to complete our power train as planned. All our parts work first time, every time.

“With IRONCAD, it is so easy to present our products to our customers,” he continued. “If a customer wants something special to fit their application, we have full control and can deliver exactly what they need.”