Twenty years ago, IronCAD made its debut at the National Design Engineering Show and Conference (NDES) in Chicago, stunning audiences with its speed and the introduction of an entirely new design methodology. “IronCAD is the talk of the show,” said David Weisberg, publisher of Engineering Automation Report, at the time. “It’s all I’m hearing about.”

Of course, mid-range 3D CAD wasn’t entirely new — the first release of SolidWorks was in 1995 — but IronCAD’s approach to 3D was entirely different. Rather than extrapolated three-dimensional objects from traditional engineering methodologies based in two dimensions, IronCAD gave users the ability to model 3D objects using 3D shapes and tools that mimic how we interact with the real world.

This intuitive experience celebrated by Dvorak had led thousands of users at NDES to recognize — instantly — how IronCAD works after witnessing live demonstrations. As Gary Stoll, then-vice president of engineering at IronCAD and one of the presenters at NDES said, “With software like this, we didn’t have to hire professional presenters to capture attention. The software speaks for itself. When engineers see how unique it is, it stops them in their tracks.”

Why IronCAD Was Made Differently

IronCAD’s fundamentally different design methodology — 3D visualization using 3D objects and based in real-world experience — was the product of its unique development history prior to official product launch.

The technology at the heart of IronCAD came from a 3D software called TriSpectives published by 3D/EYE in 1995. Originally meant to be a user-friendly 3D visualization tool, it was backed by Paul Allen’s Vulcan Ventures. To achieve its intended reach, the TriSpectives developers knew they had to create software that anyone could grasp. TriSpective’s version of 3D, in other words, had to be based in intuitive, real-world 3D experience, rather than the tradition of 2D draftsmanship.

With an initial asking price of $300–500, TriSpectives didn’t catch on in the consumer market but a number of companies in the evolving CAD field of the time saw potential and offered to buy 3D/EYE. Ultimately, the company sold to Visionary Design Systems in 1997.

Headed by David Tiley, a former Hewlett-Packard salesman, Visionary Design Systems was a CAD/CAM reseller and systems integrator that saw the potential for using TriSpectives technology as a basis for a powerful, fundamentally different MCAD platform. It was this team that developed IronCAD and took it to NDES in 1998. 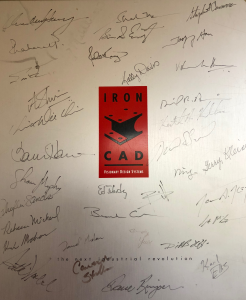 “In developing IronCAD, VDS retained and improved upon much of TriSpectives’ ease-of-use but added real geometric modeling under the covers,” wrote the Engineering Automation Report at the time. “The underlying method for building geometry is very powerful and unlike any other package on the market. This is probably the easiest program to rapidly develop geometry; it really has to be seen to be appreciated.”

IronCAD’s Other Big Difference from the Start

While most users instantly appreciated the fundamentally different, intuitive design methodology, equally significant — but less remarked — was IronCAD’s other major benefit, its design flexibility. Capable of shifting between direct and history-based modeling from the get-go, IronCAD provided users with unprecedented freedom to change their designs throughout the development process.

At least one reviewer caught on to this quieter but no-less-significant change in 3D design. “IronCAD is built around the flow of design so designers don’t have to change the way they work to use it,” recognized Design News in its review of IronCAD in its inaugural year. “Users do not need to be concerned about what will happen to the integrity of a model when changes are made. As a result, designers can concentrate on developing and refining models, knowing that the inevitable changes can be accomplished easily.”

Today, other 3D CAD platforms try to cover similar ground but the flexibility with which they alternate between direct- and history-based modeling is simply not as reliable as IronCAD’s — even in its initial release from 1998.

IronCAD Remains Ahead of Its Time

As is the case with many aspects of IronCAD such as drag-and-drop modeling, translators, and dual-kernel support, IronCAD’s technology has consistently been ahead of its time, predicting future directions for 3D CAD and solid modeling.

That’s why reading the now-defunct CAD magazine CADENCE’s verdict on IronCAD’s debut sounds just as accurate today, 20 years later: “Combining an innovative approach to 3D design, a vast amount of commands, speed and stability, IronCAD should be considered by anyone moving into solid modeling for the first time or thinking of expanding their current seats.”

If you haven’t already during the last 20 years, it’s time to experience the IronCAD difference. Try intuitive, flexible 3D CAD that doesn’t fight how you like to design by downloading a free 30-day trial today.