It is said that there is always the most appropriate tool for every task, one that is neither overkill nor inadequate for the purpose. After we completed our review of IronCAD 2013, we figured out the slot into which IronCAD fits. This review tells you about it, and makes some observations about this interesting but lesser-known modeling software.

(I am veteran .dwg CAD user with a GIS and AEC background, and so MCAD is new to me. However, after being in the CAD industry a long time, I did not hesitate to take this opportunity to run IronCAD on a test drive, seeing how far I could go. I teamed up with my colleague Sanjay Jamalpur, an MCAD specialist.)

After installing the software, we found that it sports a modern ribbon user interface and uses easy terminology, unlike some industry-leading MCAD software packages. We could see that IronCAD has made it easier for average drafters and designers to start working with the software immediately, being unimpeded by jargon-heavy lingo. In other words, the software does not prove intimidating, and is not designed for specialists alone. This is a plus for the times in which we live, where everyone expects new technology to be as easy as to use as a smartphone.

We have come to realize that .dwg editors are indispensable for any CAD software. No vendor thinks their design environment is complete without a .dwg editor. CAXA Draft is not only a .dwg editor but can act as a standalone 2D mechanical design application that has a long history and client base in China. The 2D create-and-edit capabilities were crisp and good. 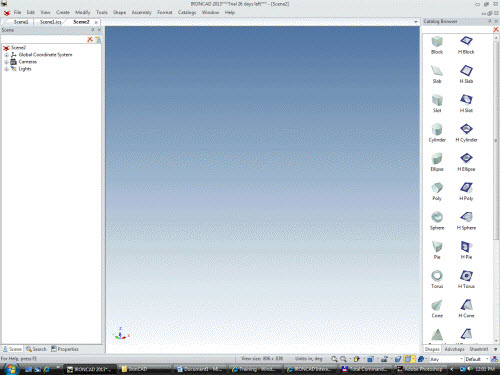 The Design Scene layout is clear and without clutter (see figure 2). There is a Catalog Browser on the right hand side and the Feature Tree on the left hand side, and our model occupies center stage. The Catalog Shapes Browser has two types of features, bosses and cuts. 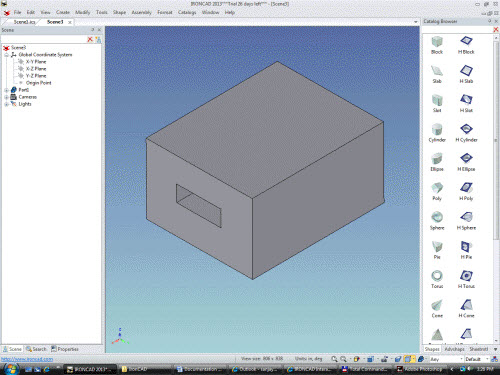 One major notable advantage of IronCAD is its hybrid design abilities, which combine the best of direct modeling and history-based modeling under one roof. To follow either approach, we didn’t need to switch between two modules: the choice is automatic and happens seamlessly. History-based features and direct modeling features that are truly mixed without the need, such as other CAD software, to divide them into two independent groups in the feature tree. In doing so, we note that IronCAD took the democratic path to please the fans of both design streams, while allowing each design method to be practiced with ease. IronCAD uses dual kernels, ACIS and Parasolid to improve interoperability on import/export as well as using kernel collaboration during design operations to improve modeling functions. 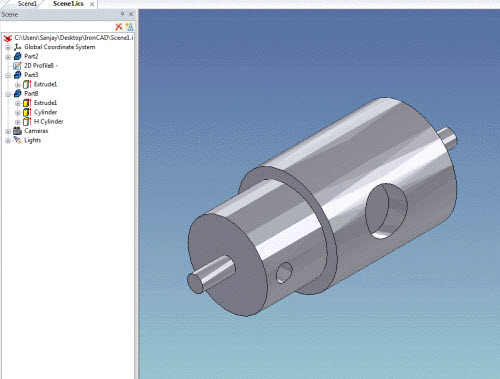 Figure 4: A 3D part with its history tree (left)

IronCAD can import geometry with a variety of model formats, like STL, STEP, and from other MCAD packages. Once a model is imported, making changes is easy. Predictive editing is offered at all possible points by the software. For example, holes laid out in a circular pattern are recognized automatically so that a change made to the diameter of one hole is applied automatically to all. The relative circular arrangement also is recognized and so holes can be moved in or out along the radial pattern as if the inter-play relationship already existed.

This kind of design pattern recognition is determined automatically by IronCAD, and it offers edits as the default behavior. Of course, sometimes the software gets it wrong or, perhaps, our design may be different in a unique way. IronCAD provides an override to doing edits manually.

The included tool palette of standard design parts, called IntelliShapes, shortens the learning curve significantly, especially for first-time users like ourselves. IntelliShapes are available from the Catalog Browser.

Extruding 2D profiles is a common modeling operation. IronCAD makes this step more intuitive by packaging it with the Extrude Wizard, a tool that does more than just extrude shapes (see figure 5). 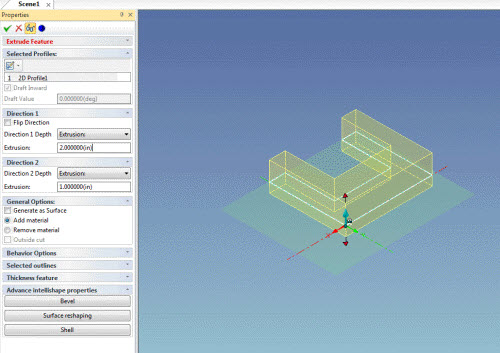 We could apply a number of additional fine-tuning adjustments during the extrude operation, like fillet, chamfer, bevel, shell, and add or remove materials. The Wizard allowed us to look ahead in our design and pre-specify some of the downstream tasks. This cleverly eliminates the many other steps that would otherwise be required after the usual, simple extrude operation. We guess this also helps the software better record the design history, as it is all done under one command.

Going back to IntelliShapes, we found smart tools for beveling and shelling (see figures 6 and 7). They capture common design intent, and pack many common operations into one wizard. We found this approach smart, because it was crafted with the most popular moves designers have in mind. 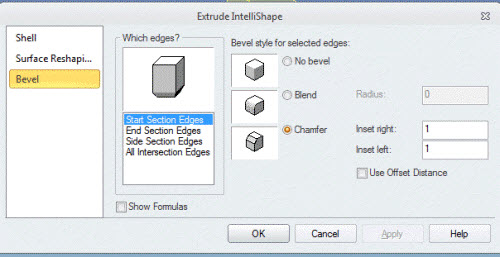 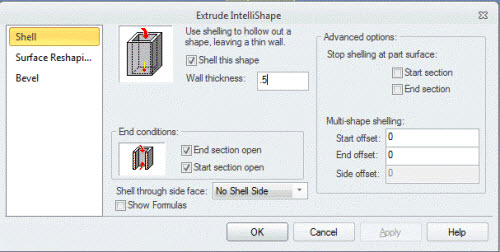 After spending some time with IronCAD, we found that it is an especially amazing tool for rapid prototype designing. As first time users, we did not have any difficulty in getting our basic design stuff done. We struggled a bit when it came to precise coordinate positioning of the model parts. While IronCAD offers a powerful TriBall interface tool (activated by pressing F10) to assist in positioning and alignment, we found we may need a bit of training to take more advantages of its full capabilities.

We tried our hand at some of the sheet metal tools and it was not a bad experience. A vast library of pre-defined constructs makes it easy for users to choose the shapes to work with and develop them into the required shapes (see figure 8). 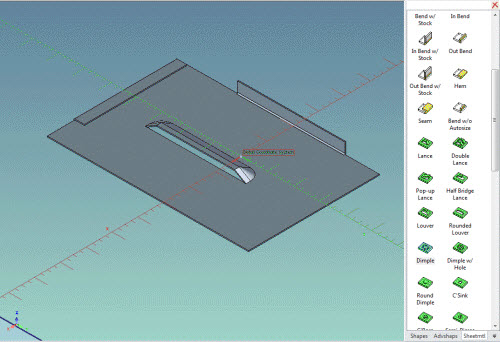 We were able to come up with the above piece in a few minutes. Overall, the tools looked impressive, were easy to use, and produced results.

IronCAD has a single-scene environment in which both parts and assemblies can be created without the need for separate files, in contrast to most other MCAD systems which have separate environments for creating parts and their assembly. Users can easily change the structure through assemble/disassemble.

IronCAD designs can be analyzed easily using NASTRAN FEA software. NEi Nastran for IronCAD is a powerful finite element analysis solution designed to run inside of the IRONCAD and INOVATE interfaces. The company told us that users are able to use the standard IronCAD 3D product functionality to design products and then perform analysis simulations directly within the application eliminating the need to launch any additional standalone applications.

Translation is a $700 add-on that allows IronCAD to import and export (for CATIA native files) native formats of all top end MCAD systems, such as CATIA V5, Pro/E (Creo), NX, SolidWorks, and Inventor. IGES, STEP, ACIS, Parasolid, CATIA V4, Pro/E (pre 2000), and a variety of graphical formats are included in the base IronCAD product.

You can take advantage in both IRONCAD and INOVATE to edit almost any imported file without recreating geometry. This is a perfect fit for suppliers who work around designs from other engineers. IronCAD has a most complete set of data translators that allow both faceted and solid geometry to interchange with all leading systems.

In my role as a programmer, customizing capabilities is something I look for in every software package. IronCAD scores well here by offering the complete object model exposed via .NET and C++ libraries. I can build upon and extend the existing IronCAD capabilities. (I did not, however, have the time to look at any of the existing third-party developments built around IronCAD.)

Standard part tables are stored in an ASCII text files, which means they can be easily customized to add country- or project-specific part libraries. We found one caveat: the format has to fit into the structure mandated by IronCAD designers. For anything different, there is a bit of ASCII editing involved.

It would be good to see in the library more country-specific parts to match national standards for some future version of IronCAD.

The screen images you have seen so far in this review so were created by us. On IronCAD’s Web site, we saw some nice looking designs fully rendered which gave us an idea of what we could produce with IronCAD if we went through the entire design process (see figures 9 and 10). 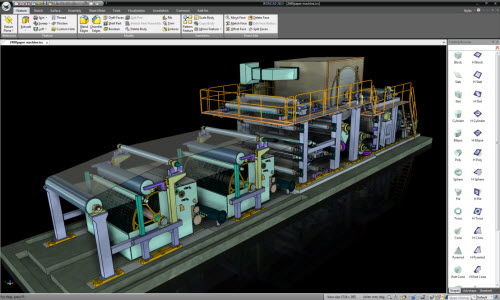 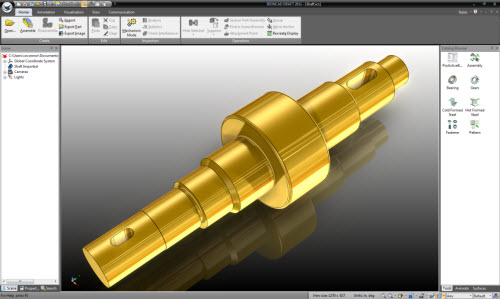 As someone who is new to MCAD, I found IronCAD 2013 to be a good bet as a mid-range modeler for small and medium enterprises. I can see these sorts of firms needing to quickly conceptualize a design, build a realistic model, and then create working drawings. At the current list price of $3,970 in the USA, IronCAD also provides firms with significant value.

For the majority of users in design and manufacturing, who need to create a concept quickly, get their assemblies in place and verified by CAD, IronCAD is the right tool for the job.

Rakesh Rao is an expert on DWG based CAD software, including add-ons. His background skills include GIS/survey/mapping software running on the DWG platform. He has worked on add-ons for HVAC, architecture, manufacturing. civil and GIS-CAD-related software. More…